A Day of Smiles and Laughter at the Children’s Center

If for one day you had the chance to make some less-privileged kids happy, would you do it? Our team had this experience, and it was a truly inspiring moment for both the recipient and the giver.

Visitors love the Philippines for her delectable cuisine, historical sites and pristine beaches. In the heart of this Southeast Asia country is Cebu, the oldest but one of the most developed cities in the Philippines. Rich in cultural heritage and a centre of trade and commerce, this Queen City of the South is a bustling metropolis of people from different cultural and socioeconomic backgrounds.

But like other densely populated cities in the country, Cebu City is home to hundreds of streetchildren, abandoned kids and orphans.

Every month, the Children of Cebu Foundation takes in some hapless kids who have been rescued from the streets. The children go to the Parian Drop-In Center, a non-profit, non-governmental organisation that runs mainly on donations from the locals. Program coordinator Redentor Betito states, “The centre’s role is to accept all children who need immediate shelter, especially those who are rescued from the streets or victims of child abuse.” The centre has been a catchbasin for Cebu’s homeless children for more than 25 years now.

They are the streetchildren, kids abandoned by their parents, kids whose parents can no longer feed them, victims of child abuse, children who need special protection, rescued children who ran away from home, and orphans. These kids come to the centre either as referrals from the barangays, social welfare services or from concerned citizens who report neglect or child abuse.

Each child’s length of stay varies from 6 months to 1 year, depending on their individual case. Mr. Betito states, “After Parian Drop-In Center, a child may be returned to his/her parents or may be referred to another centre for permanent shelter, depending on what is best for the child.”

Staff stated the children are generally well behaved, but at times handling them can be quite challenging, as these kids come from different backgrounds, each with a unique case.

Each Child Has Their Own Sad Story

We met May, one of the centre’s staff. She was downcast while recalling the story of a 4-year old child who arrived at the centre with bruises and wounds all over her face and body from an abusive aunt. A sad fact—several of the children, even as young as age 3, had been sexually abused before they got rescued. May said these abused children underwent a full medical exam, and the centre had filed cases against their perpetrators.

May also remembered a girl whose biological mother abandoned her when she was around age 12. The girl then lived with her stepfather, who treated her well. When she was around 16, her stepfather died, and her biological mother had arranged to meet with her ‘so they can be together’. The mother then took all of the girl’s belongings and promised to come back later to pick her up, but she never returned. Left with nothing, this girl was among those rescued and sent to the centre.

May had been a regular staff at the centre for 8 years now. She stated that it’s a mix of pity and relief everytime they see a frightened child rescued for the first time, pulled away from their bad situation. The staff also get emotional when the children, now happy and well adjusted in the centre, refuse to leave them when their foster parents come to pick them up or they had to be transferred elsewhere.

Currently the centre has 13 regular staff, including security guards to keep an eye on some unruly children who still try to escape to go back to their lives on the streets. Sometimes volunteers (foreigners and locals) visit the centre to sponsor a feeding programme and fun activities for the children.

A typical day for the kids at the centre goes like this:

At the time of our visit, there were 38 children at the centre. This number will soon decrease or increase as new batches of children arrive or move out. 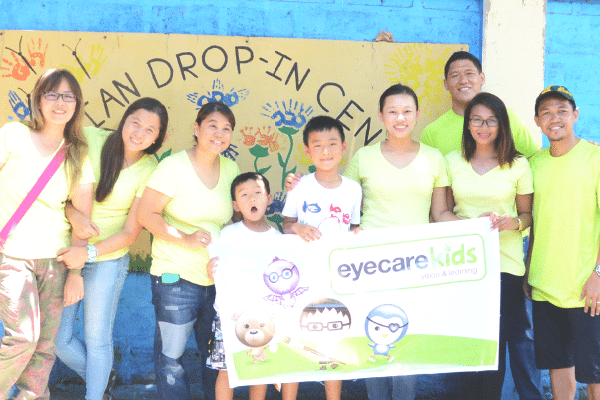 One sunny Tuesday on April 25, 2017, the Eyecare Kids team, led by Optometrist Dr Soojin Nam and her family, came to visit the children at the centre with one goal in mind—to put a big, big smile on the kids’ faces that day.

Our team brought treats, toiletries and almost 100 kg of children’s clothes from Sydney. Dr Nam’s boys (Max, 9 and Jake, 6) had fun playing with the kids at the centre.

Our team then facilitated fun games for the kids, who danced and played and laughed. Everyone got prizes, even those who did not win in the games.

Lunch for the kids and staff was crispylicious Jollibee fried chicken, spaghetti and juice. The kids ate with gusto.

At the end of the programme, each child formed a line to receive a lootbag filled with a small toy, a fudge bar, corn snacks, wafers, chocolates, and candies. Max, who always has a big heart for orphaned kids even when he was little, was happy to distribute the lootbags.

The kids had a heartwarming surprise for the team too—a song number to express their thanks. Max knew the lyrics to the song ‘Welcome to the Family’ and sang along with the kids as every adult went, ‘Awwwww’.

Seeing such love and positivity emanating from these children, most of whom had been victims of severely harsh circumstances at a very young age, truly touched our hearts and inspired us to do more for them.

Indeed, this centre for orphans and homeless children is a sweet sanctuary where the kids are shown love, provided for, taught basic life skills and helped to help themselves.

How You Can Make a Difference

Even from 3,500 miles away, residents of Sydney can make a world of difference in the lives of Cebu’s orphans and streetchildren. Though 95% of the centre’s funds come from local donations, food and supplies could get scarce, especially during demolitions, where hundreds of families are forced to flee their temporary homes. During these times, the number of kids seeking shelter at the centre could reach to a hundred.

a roof over their heads

a better chance at life.

If you’re touched by the plight of Cebu’s streetchildren and would like to help, just send us an e-mail at info@eyecarekids.com.au.